Home / About AGR / Our Production Facilities

We have been operating from our facility in the Kwinana Industrial area for more than 30 years, servicing an industry that has underpinned the success of the WA local economy.

Our competitive advantage are our dual plants, each with two reactors, coupled with our packaging and logistics operation supported within the CSBP site. 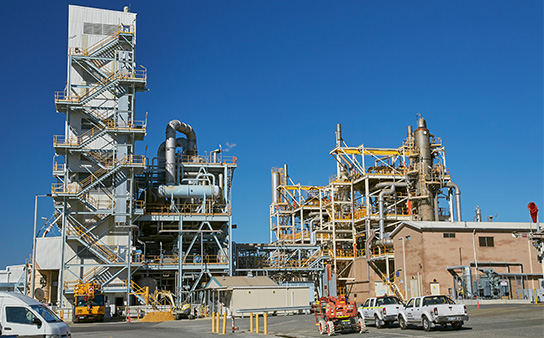 Operating our dual plants, each with two reactors minimises disruption from downtime and maintenance, which in turn improves performance of the whole supply chain, from transport to on-site storage.

Customers who rely on our product have peace of mind that we can deliver with no compromise to quality.

Our facility is coupled with specially designed packaging systems for both export of Solid Sodium Cyanide in Intermediate Bulk Containers, and delivery of Solution and STS in custom-designed isotainers.

Because our facility is based on the CSBP site, our inductions and safety resources are backed by the experience and sophistication of one of Australia’s biggest chemical manufacturers. Find out about the safety at our Kwinana site here.

The science behind Sodium Cyanide

Sodium Cyanide is created from a sophisticated process that starts with natural gas, ammonia and oxygen.

The substances are mixed and filtered before being fed into reaction vessels where the mixture comes into contact with heated wire mesh, known as gauze. The gauze, which contain platinum and rhodium, are kept at between 1000 and 1100C to prompt a reaction process to produce hydrogen cyanide gas (HCN).

The HCN is cooled before leaving a reactor, then the HCN gas reacts with caustic soda solution (sodium hydroxide) as the gas stream passes through an absorber column, resulting in the production of Solution Sodium Cyanide. The Solution product is pumped from the plant continuously to storage tanks or directly to the Solid’s production plant.

To produce Solid Sodium Cyanide, the solution is pumped into evaporating and de-watering equipment before drying in the solid production plant.

The dry Sodium Cyanide powder is then compacted into briquettes in preparation for packaging and transport.